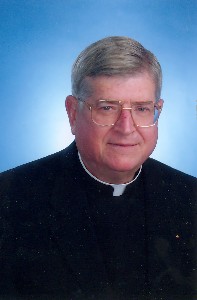 He was born on June 15, 1935 in Caldwell County, Texas.  Monsignor Bomar was pastor of St. Peter the Apostle Church, a Roman Catholic Parish in Southeast Austin.  He served Pastor of this Parish since late 1969.  Ordained to the Roman Catholic Priesthood on May 28, 1960, Monsignor Bomar has served in two other parishes previous to this assignment, as Associate Pastor of St. Mary’s Church, Temple, Texas for nine years and as Associate Pastor of St. Mary’s Church  in Waco, Texas.  He was hospital chaplain of three major general hospitals, was auxiliary chaplain for eight years at Ft. Hood, served as president of the Temple Jaycees, and earned their Distinguished Service Award in 1967, and was on the Temple Planning and Zoning Board.

In Austin, Monsignor Bomar was the Chaplain of the Knights of Columbus for twenty four years, a member of the Fourth Degree Knights of Columbus, past-president of the Founder Lions Club of Austin (The Downtown Lions), active in the Ex-Students Association at the University of Texas, former President of the Travis County Texas Exes, former District Councilman of District One, and member of the UT Ex-Student Association Executive Council.  He was a member of the Centennial Commission of the University of Texas at Austin, a three year review and evaluation of the University and its goals for the next 25 years.  He served on the Commission of 125 which was assigned the same responsibility as the Centennial Commission 20 years ago.  For many years he actively supported the Athletics Programs at the University of Texas.  He served as a Commissioner of the Austin Housing Authority for six years from 1977 until 1983.

Monsignor Bomar was named Prelate of Honor by Pope John Paul II on February 8, 1985 with the title of Reverend Monsignor.  He was invested as a Prelate of Honor on May 29, 1985 by Bishop Vincent M. Harris, D.D., former Bishop of Austin.

As a Catholic priest for 50 years, Monsignor Bomar was the Dean of the Austin Deanery of the Diocese of Austin for nine years, and a member of the Presbyteral Council (Council of Priests) of the Austin Diocese serving as advisors to the Diocesan Bishop for over twenty-eight years.  He was also a Diocesan Consultor to the Bishop of Austin.  He served on the Catholic Services Appeal Budget Committee for the Diocese for seven years, and served for many years as one of the on-call priests for Brackenridge Hospital emergency duty.

​Memorial contributions can be made to St. Peter the Apostle Church for the Monsignor Fred Bomar fund.